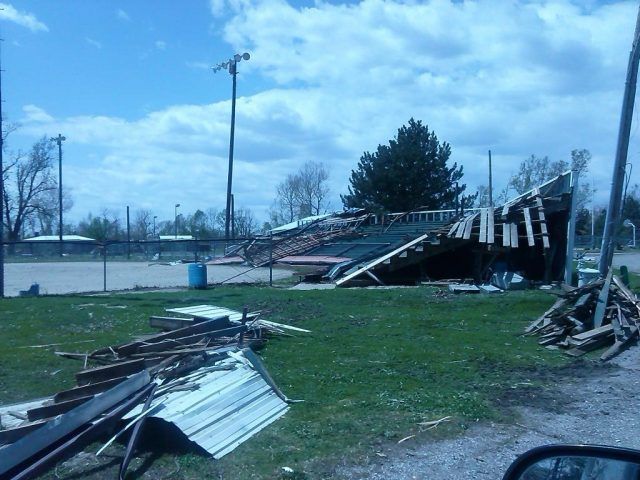 On Mother’s Day, May 11, 2014, the community of Beaver Crossing was hit by an EF-3 tornado that damaged nearly every structure in the town of 403 residents including much of the village owned facilities and many of the town’s trees.

“For years, a forest of trees hid Beaver Crossing. Now, when you come into town from the south, you can see everything. The tornado tore through the trees along the river around the town,” said Jill Sharkey, Beaver Crossing Village Clerk/Treasurer. In the last three years, Sharkey has seen the community come together to move on and rebuild.

“Our ball fields are ready to go this summer. Our pool was opened last year. There is still work to be done but with the help of many volunteers the town has rebuilt and come a long way since the tornado,” Sharkey said.

It could have been worse. No one was hurt and when the tornado struck Beaver Crossing, the Village Board didn’t have to worry about whether their insurance proceeds were enough to cover the losses. Beaver Crossing had just recently become part of the League Association of Risk Management (LARM) insurance pool. In the fall of 2013 a LARM property valuation specialist had re-evaluated the village’s assets and increased the values that were listed on the previous insurance policy- in some cases by thousands of dollars. The village buildings alone were undervalued by $1,700,000.

“Thanks to LARM, they had re-appraised everything and we had the true value on things. It made all the difference when we went to rebuild,” said former Beaver Crossing Mayor Dick Pariset. (see the video of Dick’s comments)

LARM property valuation appraisers had added on the ball equipment building and the three baseball pavilions that hadn’t been covered in the previous policy. Those facilities along with a large grandstand were destroyed in the tornado but were covered under the new LARM policy.

“A lot of times, LARM will go to write a policy for a new member and find that their buildings and contents have been greatly undervalued. That’s a major problem because, in cases like Beaver Crossing, when you have a loss, you want to be able to have enough funds to replace your losses,” said Fred Wiebelhaus, LARM Field Adjuster Supervisor/ Loss Control Assistant.

As for the missing and damaged trees, LARM paid the village $10,000 to help with tree replacement. Longtime Beaver Crossing resident Terry Barth has been instrumental in the planting of 200 new trees in town since the tornado.

“We’ve had a lot of contributions and have had a good tree survival rate. Someone knew we needed trees in Beaver Crossing. The trees that were downed were planted years ago for us so we have to plant trees for the next generations,” Barth said.

Robin Butzke, part of the Ball Committee that has worked to raise funds to get the baseball program rolling again in Beaver Crossing said there are 43 kids planning to play on the town’s fields this year for the first time since the tornado. For the last three years, they’ve played and practiced on the fields of neighboring towns Cordova and Goehner.

“Now they’ll be able to play on our own fields. We are over the moon to have gotten to this point,” Butzke said.

Beaver Crossing Tornado Statistics:
• 3,000,000 estimated pounds of debris hauled away after the tornado

• $1,126,000 amount the Village sustained in damage including damage to the Legion Hall, Village Hall, the pool, park and well buildings

• 28 buildings had to be taken down

• $1,700,000 the amount that the buildings were undervalued for coverage before Beaver Crossing became a LARM member

• 3,000 people volunteered to help with clean up in the first month